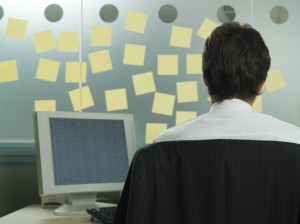 According to a 2012 survey, 51 % of Americans would rather be self-employed and 44%  think it would be possible for them to go into business for themselves within the next five years — a figure that has increased 8 percentage points since 2009.

Despite the large number of people who want to be in charge of their career, only 6% are currently self-employed.

Why the huge discrepancy?

If so many people want the freedom and independence of being an entrepreneur, what is stopping them?

The results of the survey are fascinating.

4% can’t come up with a business idea.
15% didn’t have enough capital.
10% say they lack the necessary skills.
2% say administrative barriers hold them back.

When I read those numbers I was surprised. They don’t seem to ring true. There are millions of ideas, people who are interested in investing, and anyone can learn a new skill.

So what is the real reason so few people are entrepreneurs?
Fear.
YOU MUST GIVE THIS UP IF YOU WANT SUCCESS

The thought about something that hasn’t happened.
Old fashioned, garden variety fear.

What stops most people from being an entrepreneur, is the fear of going bankrupt or the fear of an irregular income.

When people feel that their current situation, no matter how awful it is, guarantees a steady income, it’s hard to give up that perception of security for uncertainty. (Think of all of your friends who are stuck working with rude, negative, and even nasty people. They may talk about leaving to start their own business, but where are they now? Yep. They’re still there.)

The fear of reducing income is so big that it even stops people from trying to start their business on a part-time basis even while they are employed.

Of all the classes that are taught in business school, it’s clear that a comprehensive course in getting over the fear of starting your full or part-time career is needed.

Wharton, are you listening?

What get’s in your way of starting your full or part-time business? Share your comments below. Someone might have a great solution for you. 🙂