It takes courage to follow your dream. How courageous are you?

Posted on December 4, 2017 by Karen Huller in Careers, Dreams | Leave a comment 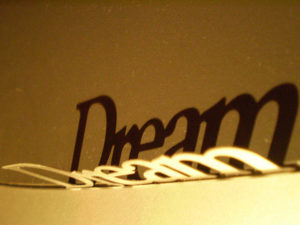 Last month for our podcast, Epic Career Tales, my assistant, Syndie, interviewed a professional artist, Jessica Serran, who has successfully made not just a great career of being an artist, but a great living. Truly epic, right?

Many of my clients have Epic, yet very conventional corporate careers, in that they started out as an entry-level employee and worked their way up the corporate ladder.

Then there are those who ventured off the corporate ladder. Of those clients, some of them really hedged their risk, and saved up 18 months of income as their safety net before they jumped off. Yet others answered the call to adventure in a moment. That moment could have been inspired by a straw that broke the camel’s back, which is the more common. But there are a couple of clients, I recall vividly, who just had an epiphany inspired by something that they witnessed, or watched, or learned, or read. Those clients inspired the idea for the Epic Career Tales podcast.

I wanted to nudge, or even catapult, people toward their dreams by telling the stories of people who successfully climbed the ladder, jumped off the ladder, or never bothered to climb in the first place, even though it seems that the infrastructure of our world promotes a corporate career as the ultimate path to financial security.

That was not my point of view, actually. My dad’s corporate career provided a good stable living for my family and I when I was young, but the divorce decimated financial resources, and when I was in 9th grade, my dad was forced into early retirement and he had to sell the home I grew up in. While my mom’s job in a small company (it was small then, but grew tremendously during her time there and since) provided her with enough for us to live, eat, and stay clothed, but there never seemed to be enough for anything extra, or extra nice. Plus, she was pretty miserable and complained a lot about her job. She came home exhausted. Her pay raises, even after 10 years, were less than a dollar an hour. I was getting better pay raises at my food service job at 15 years old.

For me, the safer path to financial security seemed to be achieving semi-celebrity status in media. When I realized a year into that career that I really wasn’t willing to do what it took to get to semi–celebrity status in media, because it wasn’t really what I wanted, it took courage to realize that I really loved my temp assignment in a corporate recruiting office. And, it took courage to follow that path in consideration of the fact that I was going to take a door-to-door job first to learn sales, and in spite of how I thought it probably would wind up – giving more to a company than they were giving back to me and resenting them for that.

Wow, my outlook was pretty bleak back then.

I know there is a population of people who do not see a corporate career as one that will be financially fulfilling. These people are entrepreneurial and usually seek out multiple streams of income. Some people don’t believe corporations have any honest employees or leaders. Certainly our beliefs shape our decisions, for better or worse and whether they are based on truths or not.

It doesn’t really matter what your dreams are. I don’t see a large percentage of the population following dreams. Why is that?

One revelation that I have stated before was that there is an epidemic, a very pervasive belief among people that we are not worthy of our dreams – that happiness is for other people.

This is tragic because they also never get to find out how brilliant they have the potential to be and how beautiful life can be when you are aligned in your career with your purpose, talent, and interests.

We all have to decide for ourselves what level of risk we are willing to take in order to have what we really want. In a lot of cases people decide what they really want, over having a career that makes them happy, is financial stability.

If that is your empowered choice, I have no qualms. Even though, I still believe that you have disqualified the idea that you can have a career that you love and that provides you with financial stability. That bothers me, and it bothers me more when people decide that what they really wanted to do wasn’t viable for them because they felt unworthy. They may not even realize that this belief was influential in their decision.

We interview these Epic Career Tales guests because we want listeners and readers to awaken to their own potential to have a similar tale. I want them to be clear that no career path is going to be without its challenges, and we wouldn’t want that, because then we wouldn’t grow. There are ways to overcome these challenges, and these peoples’ stories demonstrate what it took as well as how amazing it is to be on the other side of those challenges, and to be in a place of knowing you are exactly where you are supposed to be, doing exactly what you are supposed to be doing.

According to Jack Canfield, “Everything you want is on the other side of fear.”

And according to Will Smith, “God placed the best things in life on the other side of terror.”

And FDR said, “Courage is not the absence of fear, but rather the assessment that something else is more important than fear.”

Nelson Mandela said, “I learned that courage was not the absence of fear, but the triumph over it.”

If a professional goal scares and excites you, it probably represents your highest probability of having an epic career and life. Commit to it; give it everything that you got. If you do find out that it’s not the right goal, or that you don’t want it enough to overcome the challenges, it won’t kill you, but I promise you, you are more capable and worthy than you realize!

Shoot for something Epic!

Aaliyah – Journey To The Past