Want to shorten your commute?

Posted on January 23, 2014 by Karen Huller in Uncategorized | Leave a comment 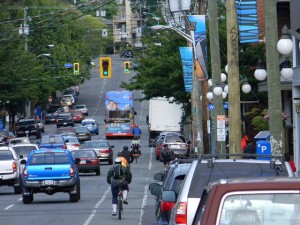 My brother used to commute from Conshohocken, PA to NYC when he was first married. It was twice as long a the hour commute he used to make from Schaumburg, IL to downtown Chicago after he graduated from college. Eventually, the trains proved to be too unreliable and he wound up staying with my cousin in Long Island during the week and living with his wife on the weekend. He’s a jet-setter, though, and it comes with the territory of working in aviation.

There were a lot of high-paid consultants I used to recruit who would live in completely different cities from their spouses. That’s not for me! I’m a homebody. I like to be planted with my family. Moving from one market to the next to find the next best radio job was something I was not willing to do to get where I thought I wanted to go in radio. That was a good thing to recognize early in my career.

In my suburb there are a lot of business parks (which enables the property owners in my town to enjoy very low taxes!). Some you wouldn’t even notice unless you were looking for them. A few are very large and are home to some pretty big companies. I’ve lived four different places in my town and there was always a business park a bike-ride away, but not until I actually started riding my bike through the business park near me did I realize what a gold mine of intelligence you can gain by paying attention to what is actually IN them.

For instance, not only did I take note of several small biopharmaceutical companies that I either never knew existed or had no idea were located so close to me, but I also found a huge building with no signage except for trespassing warnings and high-tech gates and cameras. I thought of two clients right away, one of which has top secret security clearance. On another day I had a different local client in mind and set out to find a potential target company for him and came back home with five different companies to look up.

Don’t think for a minute that walking into a company is a dead job searching method. It still works ALL THE TIME. At age 55, my uncle proudly earned his HVAC certification. He was not encouraged by the results of applying online;  he was sure his age was always going to be an obstacle, until he tried walking right in with his résumé. He’s been the Facilities Manager there for four years now and never knew he could love a job so much! His wife-to-be even turned down a tremendous opportunity that would have required relocation because my uncle was certain he would’t find another job he could love as much.

I recommend this over ANY method if you are looking for a job in your neighborhood. Companies love to hire people who can walk to work if need be. It is a very low risk hire because people who work close to home rarely ever leave for a better opportunity (unless they are like my brother.)

You can tell a lot about a company by seeing their location in person, too. You can deduce what kind of people work there and imply how well paid they are by the cars in the lot. You may be able to tell how old a company is by the age and appearance of the building.  If you see that the company has a recycling dumpster in their lot and solar panels on their roof, they are most likely committed to being green. There’s nothing like not having to drive to work if you are committed to reducing your own carbon footprint. If the grounds have picnic tables outside, come back some time at lunch time and see if there are actually groups of employees having lunch together.

These business parks sometimes have daycare centers within them, and some may also have a health club.

I know some parents who treasure their commute, actually; it is their “me” time. They are the exception, I find. Most of my clients don’t feel that they have enough time to do the things they need to do, let alone the things that they want to do, and they resent spending so much time getting to and from work. If this is you, grab your bike or your walking shoes and a notepad or smartphone. Do some local reconnaissance. As with all other job searching best practices, before you approach any of these companies about employment, find out what they are all about. Check LinkedIn; you probably know someone who works there. Find out how you can be of value to them as an employee and identify other reasons why you would want to work there so you can prepare a strong pitch. Practice your pitch until you are confident.

It takes a lot of guts, grit and gumption to take this approach, but the results can be EPIC – in your career and your life!