Is There Still a Social Division of Labor?

Posted on September 6, 2016 by Karen Huller in Employment Situation | Leave a comment 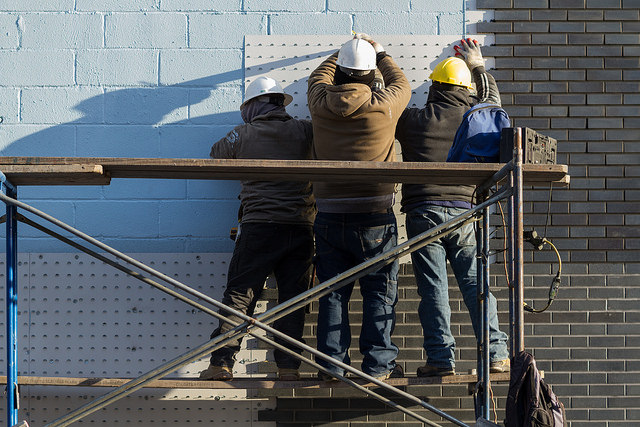 True story: last week a guy named Pat walks into Wawa to buy a cup of coffee and stands behind two men wearing suits. The two men were discussing why people wearing fluorescent vests should have their own line.

Looking down at his own florescent vest, Pat inferred that these men were insinuating that blue-collar workers should be treated differently. He asked these two gentlemen if they built the house they live in, if they manicure their own yard, and if they repair their own car.

I don’t know if Pat’s interpretation of the conversation was accurate, but his sense of separation from these two men is real.

I was watching Harley and the Davidsons on Labor Day evening and became attached to the story of the Davidson son, Arthur. He had grown up, but had not started a career like his older brothers and his father begged Author to do something respectable. By respectable, he meant taking on a skilled trade or anything at which he had to physically work hard. Meanwhile, Author was hustling to get a new venture off the ground. It was so interesting to see how entrepreneurship was perceived as not real work, and business men were known for shiftiness. They were also not trusted or respected because they did not physically create anything with their own hands.

Of course a lot has changed in America since the turn of the last century, or so we’d like to think. Certainly a divide still exists, but is it smaller or bigger, and has it flipped upside down or is it just as equal on both sides?

There is a lot of talk about the talent gap, and there are many efforts nationwide to insure that America breeds a skilled domestic workforce to fill that gap. But while people are talking about STEM careers and making it possible for more people to go to college, a very necessary population of skilled laborers is shrinking.

I certainly understand the inclination of many parents to want their child to go to college. I also understand that jobs requiring physical labor may not last as long as a desk job.

My brother, a mechanic turned educator, cannot make a career underneath the hood anymore because of a bad back. My husband has had his fair share of back issues, too. While he has a college degree, a second job as a coach, and he enjoys his work as a certified gas fireplace installer, we both have to face the fact that coaching will eventually be his main gig. Coaching is his true passion and his gift, but it does not pay as well, so we have to plan accordingly now. Really, a back injury could happen any moment.

I had one client who was an accountant and when he was laid off he went back to the job that gave him a lot of pleasure, detailing cars. It was a very cathartic change, but one he could not sustain as he aged. He had enjoyed being an accountant, but he became very disenchanted with corporate careers for a while. When he decided to return to accounting, you can imagine he faced some challenges.

I’m looking at these two different career paths, skilled labor versus corporate. I have noticed that both attract a fair amount of talent, passion, and sense of contribution while at the same time there are drawbacks, concerns, and career mine fields that need strategic navigation. I would like to believe that in the 100 years since Harley-Davidson’s creation the divide between business professionals and working class citizens has diminished. However, there is obviously still a fair amount of misunderstanding, distrust, and even resentment on both sides.

Though the Labor Day holiday was founded to celebrate the effort of unionized labor, it has evolved to celebrate the “contributions workers have made to the strength, prosperity, and well-being of our country.” I don’t find anything exclusive about that statement.

Not only do we need more youth to pursue careers in skilled labor, but we need to accommodate more flexibility in shifting careers. More importantly, we need to show skilled labors acceptance and appreciation because without them, we would not have roads or houses. Some of us would not be able to find our keys or be in compliance with home owners association standards.

Without business people, contractors could not finance materials they need to build homes, your local landscaping company would not know how to advertise, make revenue, or hire people. Furthermore, that grant would never have funded that new highway.

I think Pat summed it up perfectly: