What Sesame Street taught us about discrimination (Thanks, Tina Fey!)

Posted on May 1, 2014 by Karen Huller in Campaigns, Goal Achievement | Leave a comment 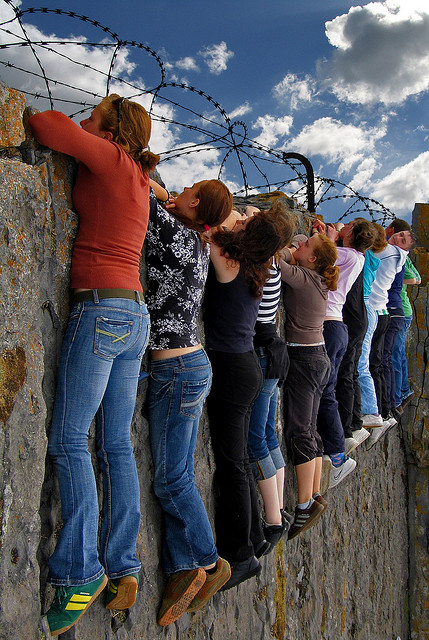 Beyond the Wall by Guiseppe Bognanni

So, I’m in this coaching program* (I’m ALWAYS in some kind of program) that asks me to identify 3-5 people I really admire and want to emulate in some way. The point being that the qualities that you admire about these people are imprinted in you already, which is why you admire them in the first place, and by going through some exercises, you can embody these qualities with greater power and be the person who achieves your ultimate purpose.

* If anyone wants to know, it’s Derek Rydall’s Soul Purpose Blueprint program. I am not far enough in it to recommend it, though I am finding it to be very inspiring and it is providing me with new ways to guide clients in career discovery.

Oprah – for overcoming economical and psychological conditioning, working her way up, and using her celebrity presence to make a positive impact on MILLIONS of people’s lives.

Daylin Leach (PA State Senator running for Congress) – for the same reason, all though he’s not yet reached a million.

Steve Jobs – for approaching the tradition of technology from an artistic and creative perspective and creating something completely new and more usable, hence revolutionizing our every day lives.

Howard Stern – for being loyal to the people who stood by him as he raised hell on the corporate stiffs that threatened to suppress his individuality. I can’t say I’m a fan of his particular brand of humor, but as someone who once pursued radio as a career, I admire his professional bravado. No one has achieved as much success in that industry as he has. He is the king of all media, and I thought maybe one day I would be the queen, but not HIS queen – ew.

Jimmy Fallon (speaking of ew: http://youtu.be/HOK4aBYNh3s)- for how he uses humor, games AND music to engage with an audience like he is their buddy and for the PURE joy he has in his work, making his own rules and keeping it EAST coast (I’m not against the west coast; I could’ve been west coast. I’m just very proud to be East coast and feel the Tonight Show’s presence here will enable greater opportunity for the entertainment industry here.)

Tina Fey – for pursuing what felt right as an individual and letting it lead her all the way to breaking through gender barriers to transform a culture, which opened doors for other female writers/comediennes. I am finding the world of mobile app game development to be predominantly male dominated, as are almost all of the investors.

In a previous coaching program, I was advised to read more biographies of people who have achieved the kind of success I envision for myself. Tina’s book, Bossypants,  is full of advice based on her journey, some of which would only be relevant should you find yourself to be a famous female television writer and talent, which I suppose is possible. All of which is hilarious.

One particular piece of advice, however, resonated strongly with me as applicable to anyone seeking to elevate their corporate success at the mercy of a hiring manager who appears to have a cultural advantage to success within an organization. I hear so many job seekers voice concerns over potential ageism (most common), sexism, or what Tina refers to as “lookism.”

“… or any -isms for that matter. -Isms in my opinion are not good.” (Can anyone tell me what movie this is from?)

“So my unsolicited advice to women [though I feel this applies to ANYONE] in the workplace is this. When faced with sexism, ageism or lookism or even really aggressive Buddhism, ask yourself the following question: ‘Is this person in between me and what I want to do?’ If the answer is no, ignore it and move on. Your energy is better used doing your work and outpacing people that way. Then, when you’re in charge, don’t hire the people who were jerky to you.

‘If the answer is yes, you have a more difficult road ahead of you. I suggest you model your strategy after the old Sesame Street film piece ‘Over! Under! Through!’ (If you’re under forty you might not remember this film. It taught the concepts of “over,” “under,” and “through” by filming toddlers around an abandoned construction site. They don’t show it anymore because someone has since realized that’s nuts.)

[I didn’t find that film on YouTube, but I personally recall this one: http://youtu.be/6mzRy-OWyvE]

‘If your boss is a jerk, try to find someone above or around your boss who is not a jerk. If you’re lucky, your workplace will have a neutral proving ground, like the rifle range or the car sales total board or the SNL read-through. If so, focus on that.

‘Again, don’t waste your energy trying to educate or change opinions. Go ‘Over! Under! Through!” and opinions will change organically when you’re the boss. Or they won’t. Who cares?

‘Do your thing and don’t care if they like it.”