What the hell made me think I could do a triathlon? (Part 1)

Posted on September 18, 2014 by Karen Huller in Goal Achievement | Leave a comment 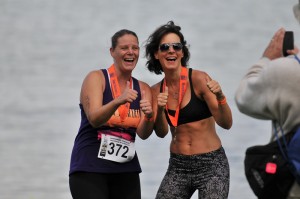 I’m pretty sure I shocked and surprised many Facebook friends and family when I shared my friend’s picture of us from the Marshman sprint triathlon last weekend. (She’s the one who looks like a triathlete.)

When she asked me the day before why I wanted to do this*, I said, “It’s a new way to challenge myself. I don’t really want to compete against other people; I just want to see what I can do. I never fancied myself a triathlete before.” Perhaps, I thought, there was a triathlete inside me. Something inside me was really excited to do this, even though I didn’t think I had prepared or trained enough.

* (Note: This is a special preview to a full-length article that will be included in the Epic Careering Fall Newsletter next week.  I will include: people who created the desire by inspiring me, the event chronicle, and more about why you would have NEVER thought that I would be a triathlete if you knew me in my youth) To subscribe, please fill out the form in the right column.

I didn’t even commit to doing it until the day before. I had a lot of reasons to NOT do it.

I had been thinking a lot about it, in spite of these reasons NOT to do it. I trained anyway and had my husband reserve off of work for that Saturday, so that I could go to the 1st-timer orientation and do the swim clinic, and for the event on Sunday.

Last week I asked my husband if he did, indeed, have off work. He shook his head no, and I said, “Oh, well.” Then, he asked why. He remembered that the triathlon was why I was asking. Suddenly, he who would usually put work as top priority during this financial “catch up” time and resist any extraneous expenses, especially after learning that he had to replace his work truck by the end of the month, was trying to help me make it happen.

“But, I’d have to take my bikes in and see if they can get them race-ready. I may even need a new bike.”

“You deserve a new bike,” he said. I almost cried. He wanted this for me.

Then, I started to think about reasons I should believe I can do it:

So, I got a new bike. I tested it, and it actually didn’t seem to perform as well as my old bike, but I was now pulling the trailer up hills. That night I called my friend, who I had not committed to, and told her that I was IN. She said, “Wait. Back up. Before you go any further, I had actually decided this week NOT do it.” She told me about all of these “signs.” In spite of a foot infection, she had gone with some other participants to test out the bike course (12.5 miles) and thought it was crazy hard. She was most afraid of the swim portion (.25 miles.) However, when I told her I was in, she was back in. Though, because we were both very uncertain about the swim, we decided that we would do the swim clinic, where we had the opportunity to swim in the very same COLD lake water. (It was 70 degrees on race day.)

After the clinic, with the encouragement of the staff who insisted that even the experienced triathletes will be less trained for the swim, and with the reassurance that lifeguards and buoys would be available if we needed rest, we committed. And, we agreed that no negative influences or thoughts were going to enter our heads from that point forward. We were totally focused on mentally practicing the optimal performance, the knowledge that we are very powerful, strong women with a lot of resolve, and the exhilaration of crossing the finish line able to proclaim, “We are triathletes!”  We also made the agreement to stick together, for better or worse.

From the picture above, you know that we got that moment. We did it, but it was a challenge, mentally and physically. I had issues shifting gears, and “we” did not perform well comparative to the other athletes. In a way, I feel like I never really did anticipate a strong performance, and I wonder, even in spite of bike issues, if I could have resolved earlier on to keep going, even if I had to stay in a higher gear, we both would have done so much better. I wonder in general – if I had higher expectations, would we have finished sooner? Perhaps I/we will find out next year.

In the meantime, my experience reinforced for me that I need look no further than deep down inside me to know if I can do something or not. More importantly, I feel like I can better reinforce for my daughters a few very important life lessons that I hope inspire them to challenge themselves to reach their greatest potential:

(P.S. – Bonus pic! Here’s me singing with the above singer/songwriter, Jeffrey Gaines – another highlight of my life.) 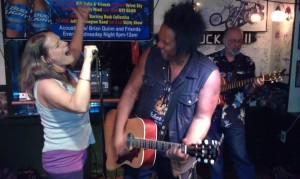 How are those new year’s resolutions coming along?

Posted on June 19, 2014 by Karen Huller in Goal Achievement | Leave a comment

This isn’t the first year I wrote down my goals, but it is the first year that I accomplished two of my goals in the first half of the year. There were a few distinct differences between the ways that I managed my goals this year from previous years, and they probably aren’t what you think they are.

I thought less, felt more and acted without hesitation.

Whatever your goals, they should be a stretch from what you are currently achieving, and that usually means that you have to stretch, or expand, your comfort zone and do something you may be a little anxious about. Here are a few things that will help you think less and act more.

Now that we have entered the last half of the year, rejuvenate your quests. Dig up those annual goals and try some of the tips above.  Share your own in the comments below!

Taking out the (head) trash!

Posted on November 7, 2013 by Karen Huller in Managing life | Leave a comment 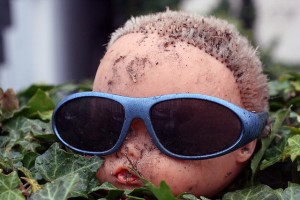 There are many phrases for it, many of which I’ve heard recently. This leads me to believe that there a personal message about this personal growth rite of passage meant for me to notice and use in my life. “Going to the fire.” “Being on the field instead of in the stands.” ” You can’t go around it you have to go through it.”

For the most part I have prided myself on taking epic leaps in my life for the sake of personal or professional expansion. My comfort zone is much more vast than the 8-year-old me would have even imagined. Since being that scared, intimidated, self-conscious little girl, I have made it a mission to prove to myself what I’m capable of. However, in my quest for personal and professional development, I am confronted and very haunted by things from my past – stories that I have inherited, stubborn self-limiting beliefs that remain, and bitterness and resentment that resurfaces during moments of weakness.  While I know, logically and consciously that these beliefs are just reoccurring stories that my brain made up and have very little truth in them, my subconscious believes them.  They continually redirect my life to align with the self-limiting beliefs rather than the identity I have been striving to create for myself.

Why do I have so much to prove to myself?

It is the answer to this question that is, fundamentally, the reason I hold myself back. I’ve tried various methods of ridding myself of this belief –  EFT, The Sedona Method, meditation, affirmations, declarations, incantations, etc. I still believe that all these methods have tremendous application to my life, but for this one reoccurring story, they have not done the job of ridding me of it.  (This Brainathon event on Saturday looks promising, but still…)

In my practice of being present, I notice signals that are meant to prompt me into appropriate action. I do believe there is no such thing as coincidence. I believe that there is an energy that is common among all of us, that if we tune into it, all of our questions and qualms are answered. I believe that this is how we achieve a self-actualized life. The message that I have been getting loud and clear lately from various sources, including Eddie Vedder‘s interview with WMMR, a speaker that I had for a social media subgroup that I run, my intern, and various books and articles that have been passed my way in the past couple months, is this:

I need to stop avoiding the source of the story and deal with it directly.

This means potential conflict with someone that I love. That means that there’s the potential that I could, by bringing this to light, cause a rift that could impact not just my relationship with this person, but other people’s relationships as well. I’m resolved that I have done everything possible to overcome this story without assuming such a risk. It will eventually become part of my new story. But I have to resolve the old one first. I’m sure if you have read this far, you probably want to know what that story is and who I’m implicating as being the cause. I assure you – the cause is me – I created the story. I know this, and I know I can create a new story. But I have to walk through the fire. There’s no more thinking I can get around it. The story reoccurs unless I put it to rest with this individual now.

I know I make it through it. I know the other person will make it through it as well. And when I share with you my new story you will get all the juicy details of the old one. Until I have the opportunity to share the story with the individual who inspired it, she will remain anonymous.

I fully anticipate someday that I will revolutionize careering and hiring. Someday, I will by a sought-after keynote speaker and visible spokesperson for career empowerment. I know that there are many people out there who have similar or smaller dreams and are stopped by head trash. If you don’t have any trash, or even if you do, and you live an actualized life, you may see other people who are inabile to succeed up to their own standards as lazy, weak leeches who would rather be supported by the government and others’ hard work than go out and help themselves. I see that head trash is an epidemic – it is a toxin that has poisoned the minds of too many people who have amazing potential. Someday, I will tell my story and help other people take out the trash, transcend their pasts, and write new futures. So, if I’m going to “call out” this person in a very public forum someday anyway, I’d rather tell them now about the stories that I made up about them and about me.

Stay tuned and wish me luck.