Posted on October 31, 2013 by Karen Huller in Gamification | Leave a comment 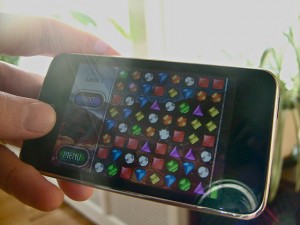 I spoke last week at the GVFHRA HR Summit on Gamification in Mobile Recruiting at Penn State Great Valley.  I took the opportunity to gather some intelligence that will be helpful to understand the implications of and barriers to adoption of gamified mobile recruiting. This blog is dedicated to sharing this data.

Everyone would rather have their recruiters out amongst people actively recruiting than sorting through online submissions.

Four attendees had said that their organizations had explored gamification for either recruiting or training. One attendee said that her company had been evaluating it for 10 years, but due to compliance, cost and development concerns, no decision had been made yet. Another attendee pointed out that the companies who have implemented gamification for training will be able to provide others who aim to implement it for recruiting with a lot of insights on both being successful AND avoiding failures.

How many applicants per job: 75-100 average, which is in alignment with national averages and how many depends on level of the position.

When the group was asked, who was the most elusive demographic or candidate type, no one answered. One attendee did voice the concerns of the whole – While “demographic” is a common term when it comes to marketing, which was discussed as a function of recruiting, it is illegal to profile candidates who are of a particular age, gender, race or health status.  For the sake of ongoing reflection of how using a mobile game to attract talent, we defined demographic as a profile of a candidate with particular behaviors, interests and qualities, regardless of age, race, gender or health status.

We also clarified that during strategic planning, a human resource organization would determine the general skill level of candidate for which they will want to build a pipeline, and that would influence whether a mobile game would be a good investment and critical component of a human capital planning strategy.

A lawyer who spoke in a later session brought up an issue with using Facebook during the qualification process, as more may be revealed about a candidate than you should know prior to giving that candidate a fair assessment. This insight will most likely influence which social media sites are accessed at various junctures in the recruiting cycle in the standardization of recruiting workflow in an internal mobile recruiting game.

All but two people were using LinkedIn groups to as a talent community to source skills needed ongoingly. Other talent communities mentioned by Joe Stubblebine of Beyond.com (founder of Jobcircle.com), who attended this session as well as spoke in the next session on social recruiting, included GitHub and Stackoverflow (a forum for programmers) as alternate talent communities.

Most were in general agreement that the metrics that their organization uses to measure recruiting performance were 70-85% accurate.

Only one attendee knew her organization’s cost-per-hire off the top of her head, and stated that it was $35,000-$40,000. Five attendees knew that this data was available to them, but they did not know if off of the top of their head. This seemed shockingly high, as a survey of average cost per hire conducted in 2010 by Bersin & Associates found that the average cost per hire for all U.S. companies was $3,479, though companies with 10,000 employees or more averaged $1,949.