Posted on November 6, 2017 by Karen Huller in Marketing | Leave a comment 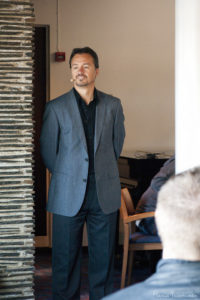 It has taken until November to cover all of the mind blowing teachings imparted to me in August at the MindValley Reunion in San Diego. While it’s hard to say that they saved the best for last, because I had many favorites throughout the weekend, the last outside speaker was rated highest among their speakers, and it was very easy to see why.

I had known Eric Edmeades as the “WildFit” guy. Wildfit is a nutritional program published by MindValley that has produced very impressive results. He wasn’t there to speak about WildFit, however, and it appears that is just one of many programs, businesses, and successes from which he could provide us with valuable lessons. He went through a list of possible topics, all of which appealed to me. What he chose was inception marketing.

First let’s talk about what inception marketing isn’t: it isn’t tactical or transactional. It isn’t competing for people who are searching for what you sell. It isn’t guessing what will make your prospect buy. It’s not about modeling your competition.

If you are a job seeker reading this, you might be wondering how this applies to you. Firstly, I ALWAYS assume when learning something about marketing that there is an application for job seekers. That being said, not all methods are appropriate for all job seekers. Branding is the exception, in the 11 years that I have been advising and interviewing job seekers, all have or would have benefited from branding.

In this particular case, inception marketing is applicable to those actively or passively seeking an opportunity to increase their influence and impact, the byproduct of which is faster career growth and greater income.

Back to what inception marketing is: It is defining your target, understanding deeply what is important to them, identifying what they are thinking about, strategizing ahead of time the steps and stories that are going to create attraction, and providing them with engaging content that subtly moves them to realize and decide that they want and need your product.

This is about asking (a la Ryan Levesque’s ASK method) and listening. It’s about nudging and nurturing.

It is about appealing to your audience’s emotional reasons for wanting, and their logical reasons for feeling good about that (because sometimes we feel better justifying that in which we invest.) Then, they naturally sell for you.

If traditional marketing is darts, where you try to hit one little target, this is chess.

Before I share with you the steps, let me share with you the example that he gave, which demonstrated why he is such an in-demand speaker. Eric has had some enviable adventures, which give him a wide variety of intriguing experience from which he can compose compelling stories. The adventure he shared was hunting with an indigenous African tribe. This particular story took place during a second stay he had in their village, and it seemed the tribesmen were even more accepting of Eric as one of their own because he was able to hit the target on the first try with one of their bow and arrows. The pressure of these bow and arrows is much higher than one you might find at a sporting goods store here in the US. He showed us pictures of their more senior tribesmen, who you could definitely not identity as more senior based on their fitness, because they were ripped!

After hitting the target they invited Eric to go hunting with them, which he did a couple times. The second time it was an all-day event. Eric had been an avid runner until some time in his thirties when he had a knee injury. But these men were running…long distances…bow and arrow in hand…without making any sounds. This was something he noticed as he was struggling to keep up, his knee giving him pain. They were not running the same way as him. While he was putting his whole foot down, making a ruckus and probably scaring game away, he noticed the tribesmen were only using the front pads of their feet, and they seemed to spring off of them rather than stride. So, he started mimicking them, and he found that, not only was he now running without noise, he was running without knee pain. He was better able to keep up. He went home and considered taking up running again, but this time he was also considering something he never thought he would – buying a pair of those feet shoes. You know the ones – they look like feet.

Prior to starting this story, Eric demonstrated how at any given time, 3% of the population is actively seeking and shopping for something. He asked us to raise our hand if we were currently looking to buy a new phone, renovate our kitchen, looking to book a cruise, and buy running shoes. Time after time the number of hands raised represented roughly 3% of the room.

After that story, however, he asked how much of the room was now considering buying the feet shoes. Much more of us raised our hand – me included, and I totally made fun of my husband for buying those shoes. He even got a few bucks from the class action suit against the company for false advertising the health benefits.

At first, from a time and money perspective, it sounds very appealing to think that marketing doesn’t have to look like guessing about SEO, bidding on keywords, worrying about rankings, etc.

What you have to realize, however, is that the steps involved in a successful inception marketing campaign require quite a bit of legwork, and then, once you have incepted prospects, you have to continually keep them incepted by providing value and advice. This is not the easier way, so to speak, but it is a more meaningful way to build a customer base, and over time you will have less selling to do in order to increase your reach and continually grow your customer base.

It is a long-term strategy. This is where job seekers who seek to increase their influence and impact for greater career growth and income can apply this method: Start to notice where there are events in your life and at your job where a need for you is created. Tell the stories using the platforms available to you – LinkedIn posts/status updates, corporate wikis, industry publications, on stage at conferences, in a book, etc.

In the career management course that I teach at Drexel University’s LeBow College of Business, we share various kinds of stories with our students and introduce how they can frame a story in a compelling way wherein the story actually becomes their proof of unique value.

Here are some of them:

Wouldn’t it be great if you knew which kind of story appealed most to your audience, which would be the employer if you are a job seeker. But NOTE: one of the first steps is to really be intimately familiar with what drives your audience to take action.

Here are the steps of inception marketing:

Eric certainly offered us some very pragmatic content, and he did so with humor and humility. Considering that since language existed, storytelling has been how human beings teach, it seems logical to expect that it will never go out of vogue. The media we used to tell these stories will evolve, certainly.

If you need help understanding your audience and telling your story, well that is our specialty. We LOVE to help corporate influencers influence, because that is how meaningful change occurs.

What kind of action would you like your audience to take?

Survivor – The Search Is Over

Survivor’s official music video for ‘The Search Is Over’. Click to listen to Survivor on Spotify: http://smarturl.it/SurvSpot?IQid=SurvTSIO As featured on Ultimate Survivor.