The Jetsons Predicted the Future of Work, it Never Came 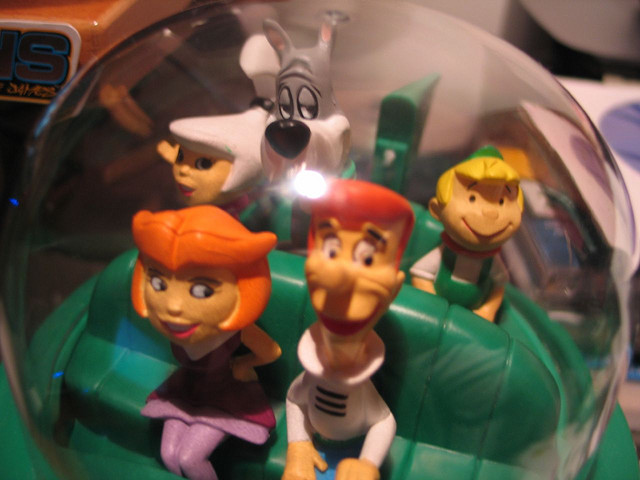 The Jetsons on My Desk by Quasimime of Flickr

Growing up I remember being inspired and intrigued by The Jetsons, which had an idealistic idea of the future American working culture. The Jetsons boldly proclaimed that in the 21st Century, Americans would work fewer hours and have more leisure time each week. In fact, the biggest crisis on the horizon would be the lack of working time and people not knowing what to do with all of their free time. The leisure-filled utopia predicted by those living in the 1950s and 60s never came to pass. Instead of a predicted 16-to-20 hour work week, Americans now work an average of 47 hours per week.

When compared to other cultures, Americans tend to work longer hours and take shorter vacations. The US is also the most overworked developed nation in the world and has recently overtaken Japan in the number of hours worked per year. Working longer hours has had an interesting effect on the economy. The United States is much richer than Europe and has created more wealth because America has a higher population than Europe, and that population works longer hours. Individually, longer hours do not equal more productivity, especially if the number of hours worked extends beyond 50 hours per week. According to a CNBC article, employee output falls drastically after 55 hours per week, and around the 70-hour mark nothing more is produced. Additionally, many salaried employees putting in extra hours at work aren’t paid overtime: those extra hours are essentially “free” for the employer. The downside to employers is employee burnout, absenteeism, and higher turnover rates.

According to a DIT (Dublin Institute of Technology) research report, 1-in-6 US employees now work more than 60 hours per week. The number of American men who regularly work 48 hours per week or more has risen by 20% in the last 25 years. A study by the Organization for Economic Cooperation and Development stated that Americans are working 20% longer than they did in 1970, while the numbers of hours worked per week has fallen in other industrialized countries. The United States is the only developed country in the world that is not required to provide families with mandatory paid maternity leave, and the Family and Medical Leave Act only covers employees if they’re eligible. When compared with other countries, the situation is so bad that even comedians such as Jon Stewart can’t help but mock it. The Newsroom also addressed the issue, among many others, in a stunning response that debunks the myth of America being the greatest country in the world.

President Obama commented on America’s working culture in late June. “Too many Americans are working long days for less pay than they deserve.” As a result, upcoming changes to federal overtime rules may curb the number of hours salaried employees can work if they make $50,440 or less per year. Either employers will have to pay overtime, or employees will work fewer hours. The changes are expected to affect 5 million workers. The Vanguard Group has already implemented these changes by reclassifying 2,100 of its salaried U.S. employees to hourly employees and the results have been mixed.

When it comes to days reserved for vacations, American culture falls behind the rest of the developed world. Compared to other countries, Americans receive an average of 14 paid vacation days per year, while France tops out at 39, the UK receives 24 days, and even Canada enjoys an average of 19 days. In some countries vacation days are mandated by law. So why do Americans work so hard and take so few vacations? The reasons are numerous and complex. A Wharton article points out that despite employees’ willingness to accept less pay for more vacation time, hours have been creeping higher for salaried workers. Employees are being asked to work longer hours because it’s cheaper than hiring new workers and unions aren’t instituted in many sectors to protest this practice. People also refuse vacations because they want to get ahead in the workplace and fear being replaced if they take all of their time off. Others fear that work won’t function without them.

The Wharton article also states that Americans’ self-worth is tied to being able to earn more and to spend more. This means bigger homes, more vacation homes, and bigger cars than European counterparts. Additionally, workaholism is a point of pride in our culture, and even while on vacation, workers still engage with the office thanks to technology.

In an attempt to retain a happier, more productive workforce, some companies have recognized the importance of making quality-of-life improvements. These employers have instituted unlimited vacation policies. As long as people are on top of their work schedules at these companies, they are able to take time off whenever they need. Seer Interactive and the Brownstein Group are two local companies with such policies. When voluntary vacation days don’t work, other employers have been known to either force or entice their employees to take time off. Some companies, such as Evernote, give employees $1000 or more to leave work for a week, while other companies require their employees to take at least two weeks of vacation a year.

In comparison, Europeans tend to value the ability to take long vacations and disengaging from work. When a European goes on vacation, it is not uncommon for an employee to not answer phone calls or e-mail until they return. France is famous for shutting down every August as the majority of the country goes on vacation. The ability to take and enjoy leisure time is seen as a badge of pride. When I was honeymooning in New Zealand, all of the other couples on our excursions were Europeans and were on eight-week “holidays.”

Even as Americans are working longer hours, some employers have been experimenting with other ways to boost productivity. One such method is the inclusion of naps in the workplace. These employers see it as a way to counteract sleep deprivation, lost productivity, and to reduce sick time taken. Companies such as Google, Nike, and the Huffington Post are known for allowing employees to take naps when needed. In fact, Arianna Huffington had her own revelation about sleep and productivity when she collapsed after working long hours with very little sleep. Allowing for naps can also boost an employee’s productivity in the short-term with improved performance and alertness.

There are countries with longer working hours than the United States, namely in Asia. In many Asian countries working long hours, sometimes 12 hours per day, is considered normal. In Japan, this type of workaholism is known as “karoshi” or “death by overwork.” It causes 1000 deaths per year. The country also has one of the highest suicide rates in the world as more than 25,000 people took their own lives due to stress from work, depression, isolation, and financial problems. (Fortunately, the rate of suicide has been on the decline in Japan.) In many Asian cultures, people are expected to live to work and to sacrifice their personal lives for the sake of a company. In terms of vacations, workers are reluctant to take time off. In China over 70% of workers don’t take their paid vacation time, and some workers haven’t taken a vacation in years.

Why time off matters

The implications for health and personal well-being are numerous. In my previous article, “Is Work Killing You?” I wrote about how not taking time off is detrimental to health and productivity. Long hours do not equal more productivity, and ultimately cost employers down the line with absenteeism, sick time, and high turnover. Workaholism and the fear of being seen as unproductive may have become normalized, but the quest for an ideal work-life balance is higher than ever. There are countless articles that offer advice on how to balance a working life with a personal life. If you have your own work-life struggles, these articles are great resources.

Even as forward-thinking employers seek to address the lack of vacation time in American culture with generous perks and benefits, nothing will change unless the culture changes from the top. Americans can look to other countries for ways to structure their own vacation time, but cultural issues around vacations are deep-seeded. As long as people see long work hours as a point of pride, and others fear getting behind in productivity, or being fired, change will remain sporadic and slow because leaders determine the culture and set the example. If more leaders are willing to take more vacations, it shows employees that it’s okay to take and enjoy vacation time.

In the 1950s and 60s, labor experts were certain that Americans would be working fewer hours by the 21st Century. The Jetsons, inspired by the sentiment of the time, had George Jetson working nine hours per week. The idea of working less than 20 hours a week may not have become reality (and probably never will), but a 40-hour work week is definitely a more realistic approach. After all, working more than 50 hours per week certainly doesn’t increase productivity and leads to future problems. The utopia promised by The Jetsons doesn’t have to be a nine-hour work week, but the promise of more leisure time is obtainable. Just imagine what work and leisure time would look like if more Americans worked closer to 40 hours per week and used their allotted vacation time.