How I saved myself from me

I beat myself up pretty bad sometimes. Last week was a doozy.  It seemed like anything that could go wrong did go wrong. Usually I know what to do to take myself out of a tailspin; I’ll plug my phone into the radio, and play some motivational, informational YouTube video try to find my center and gain a better perspective, perhaps Tony Robbins, Stephen Covey, Jim Rohn or Deepak Chopra, etc.  This was a futile effort, similar to when I try to meditate for just 15 minutes while I hope my kids play safely and quietly in another room, but I’ll hear them fight or get hurt or break something, and it’s as if I should never have tried to meditate in the first place. It’s as though I’m even more angry that I can’t just have 15 minutes to restore my energy and focus. Every attempt to find my center last week was interrupted by a variety of saboteurs: kids misbehaving, things breaking, technology not working, weather changes, unnecessary messes, plans being broken, sickness, infestations – you get the picture. I was looking forward to making progress on four major initiatives. There were client projects that I was excited to start or complete. I had administrative projects, like my taxes, that I was anxious to get done. On top of that, the dishes in the sink were piling up, the messes my kids were making were beginning to accumulate, and the cat box was in desperate need of changing. I was defeated and disappointed in myself. I felt swallowed by chaos. Been there?

Having shared with you before and knowing well that resilience is the number one quality of successful people, I garnered my grit. In spite of how I felt, I was somehow able to keep going.  Once I was over what I hoped to be the worst of it, I decided that I would make a list of everything that I was actually able to do that week in spite of the relentless kamikaze challenges.  After I made this list I felt powerful. Without my permission, Katy Perry’s Roar was playing loud in my head like an anthem. I was in awe of myself. 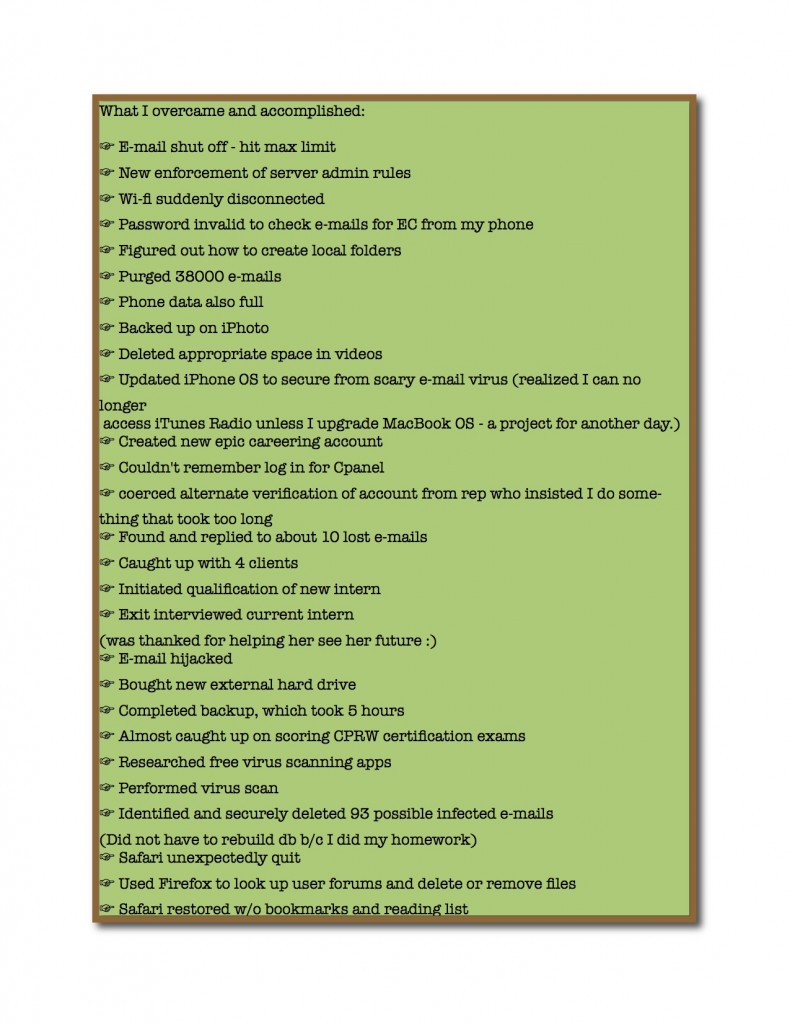 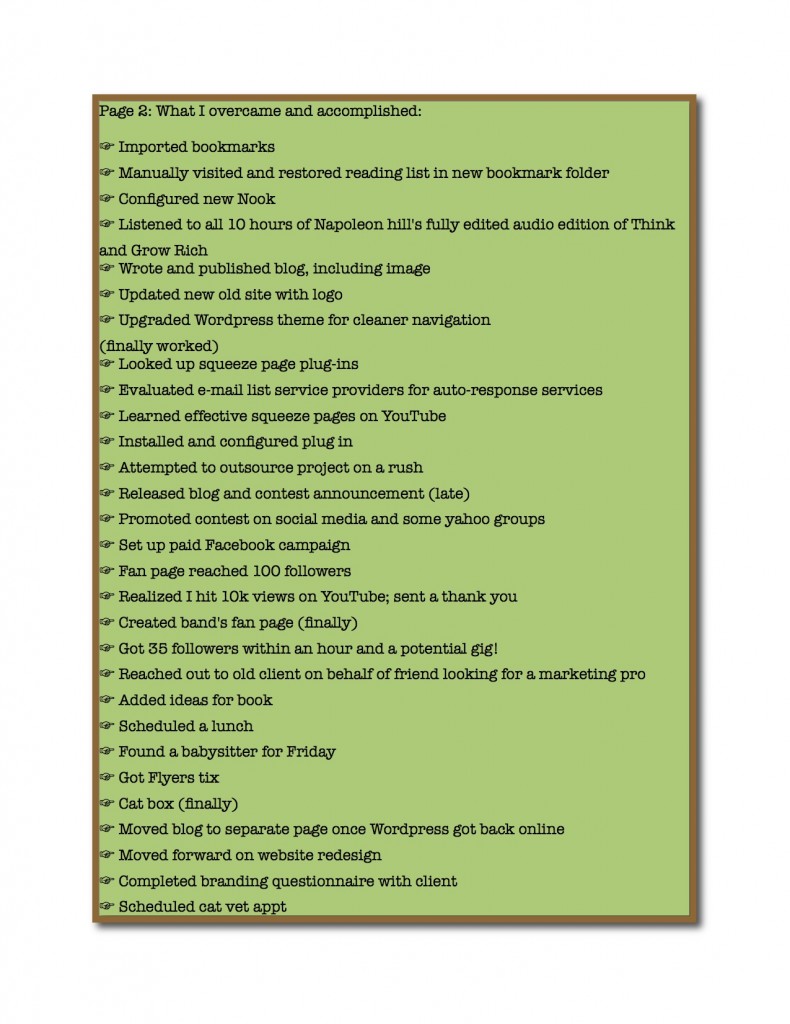 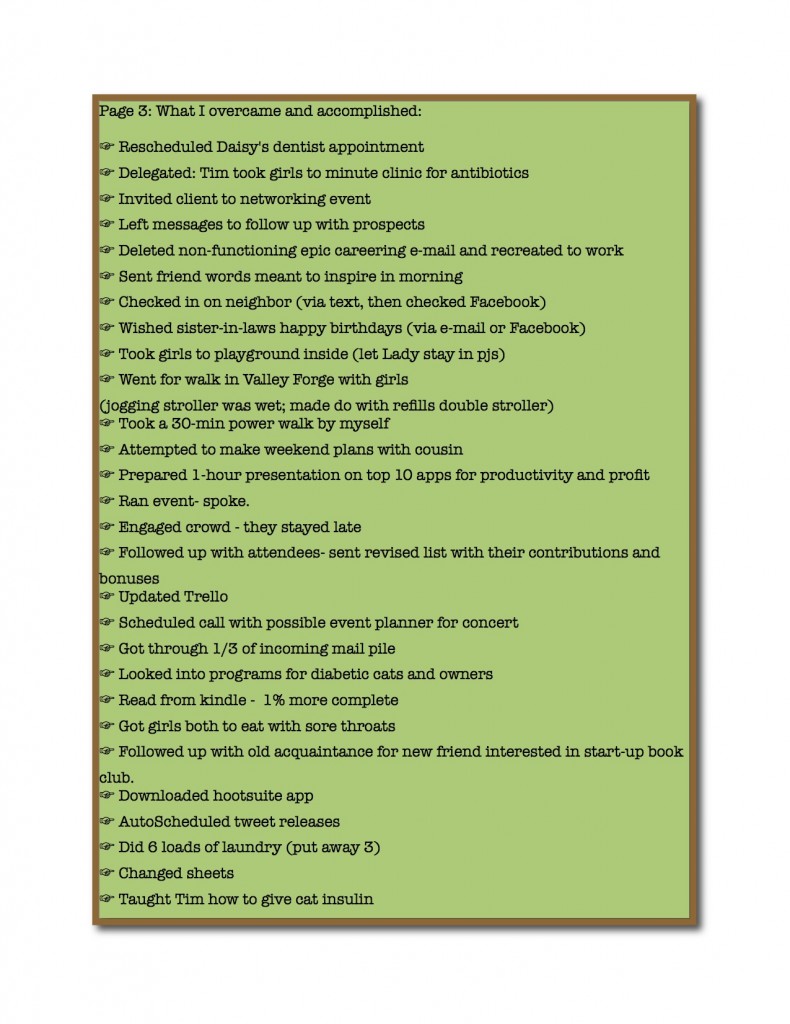 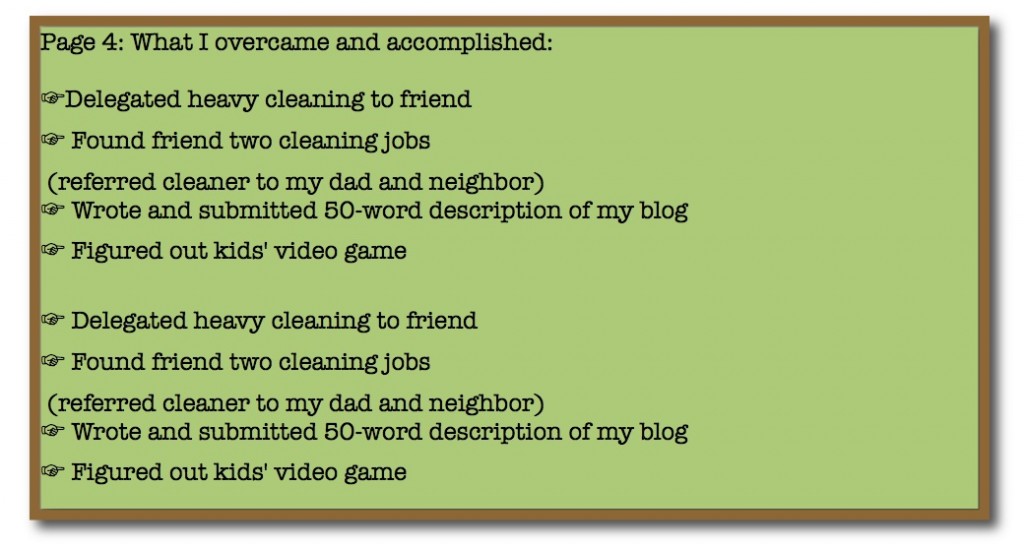 The next day, it was almost like I was challenging something to go wrong. I had my game face on, the one I learned to give pitchers when I finally gained confidence at the plate as a senior. I was like, “Go ahead and try me.” Coincidentally, it was one of the best days that I’ve had in a while. Things went pretty smoothly, until my throat became sore. I knew I was getting strep, because my girls just had it. I almost asked myself, “When will this ever end?” Then I laughed at myself – out loud.  The answer is: it won’t end. The good news is, I’m getting better at dealing with what comes while keeping my focus forward. I had no idea I was improving like this until I made that list.

We all beat ourselves up from time to time. That list of things we want to do does not seem to get shorter, and maybe it shouldn’t. The list of what we have to do will never be completely done as long as were alive. That’s just what’s so. I realize with magnified clarity that I am a warrior training to be able to handle bigger problems so that I can do bigger things in this world. That is how I choose to see it, and as long as I do, I have the power.  So, bring it!