Posted on August 28, 2014 by Karen Huller in Social Media | Leave a comment 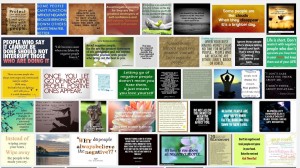 Sometimes, we have to “cut the fat.” Success teachers of every kind will advise you to eliminate negative people from your life, though they recognize that it’s not so easy to do.

“You cannot expect to live a positive life if you hang with negative people.”

“Toxic people will pollute everything around them. Don’t hesitate. Fumigate.”

― Mandy Hale, The Single Woman: Life, Love, and a Dash of Sass

Even Deepak Chopra can only offer strategies to deal with certain types of negative people and promotes avoidance of other types whenever possible.

Because social media has transformed our social lives into data that can be tracked, avoidance can get pretty tricky.

At a Facebook workshop I was teaching to a group of real estate investors, a question unrelated to business was asked: “If you un-friend someone, will they know?”

The answer: They aren’t notified, but there are many ways to find out. I described how they will see you comment on a mutual friend’s or family’s post and they might go to post on your profile or send you a private message and notice that there is an option to friend, as though you aren’t already friends.

Thanks to God’s uncanny timing, I saw this post by an unnamed friend yesterday:

“So, today, I found out that one of my friends in real life had ‘unfriended’ me some time ago on FB. This person is an ultra left wing liberal, an ardent Obama supporter, and we would often get into it when they would post memes and misinformation that were either pro Obama or anti-Republican… I was wondering why I was no longer seeing any posts from this individual, and noticed a comment from them on a mutual friends post. I wanted to congratulate them on something that had recently happened in their life, and was going to message them, when I realized it said I should send a friend request…What I find so amusing is that I have NEVER unfriended someone because I disagree with them politically…If you only keep friends who agree with you, if you can’t defend your position against someone who is well informed on the issues, your life is going to be pretty boring, and you will never expand your mind to new things. I still love this person, I was quite surprised by this behavior. I guess I just won’t love them on Facebook anymore! Just sayin!”

“I think FB is the worst thing they invented; people fight, argue, break up, all of this stupid site, and when peoples feelings get hurt, instead of trying to discuss the situation, then the texting begins, i cant take the drama, the BS, and all the crap that goes with it, so I hear ya, and I know how it feels; i get taken off as a FB friend for less then that, and I take people off too for whatever reasons, its all this stupid FB stuff, sometimes i take my page down for a time, cause i dont want to see all the negativity, and I actually feel better without seeing it, just saying too.”

Is this an added layer of social rejection? Is it better to remain blissfully ignorant about what people say about us behind our backs?

There were three or four workshop attendees who were hesitant to expose themselves to potential ridicule and undue drama. When you see an emotionally charged exchange like this, it’s hard to blame them.

I made the argument that fear is a powerful and justifiable emotion, but we have to carefully evaluate how much we let it make decisions for us. Because, really, what’s worse? Limiting our success and stifling our growth, or not being liked and accepted?

Here are a few authors who actually did it – they left Facebook for “good:”