A Power Mantra for Next-level Professionals

Posted on June 11, 2018 by Karen Huller in Careers, motivation | Leave a comment 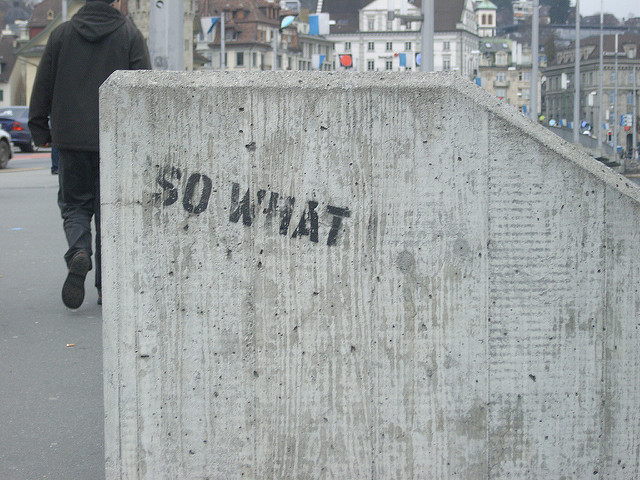 Two weeks ago I was going through my brother’s senior yearbook. Underneath the seniors’ pictures were captions, including favorite phrases. My niece had some trouble properly pronouncing one of my brother’s choices: “Buuuudy.” This was a quote from one of the 80s most unlikely phenomenons, Pauley Shore. It occurred to me that if he knew nearly 30 years later these phrases would be immortalized and read by his kids, he might have chosen other words, but he was 17.

I took a look at my own senior year caption. It was definitely not what my 40-year-old self would have wanted to immortalize.

So, what would I immortalize now?

I might choose something timeless. There was a phrase that I learned when I had a door-to-door sales job, which became my mantra, “Some will; some won’t; so what? NEXT!”

I still find this completely valid. That door-to-door job I worked one summer was brutal in many ways – hours of walking alone in a suit, even when it was hot and humid, even in sketchy neighborhoods with high crime and incidences of drive-by shootings. It certainly made me more street smart and thick-skinned.

Even though being successful in that job depended upon people (business owners) liking and trusting me, I learned that I didn’t need EVERYONE to like and trust me. Some people just won’t, and the faster I moved on and let go, the faster I could get to the person who would say yes.

With that realization came a level of freedom I hadn’t yet known, and so many of my past pains around not being accepted started to dissolve. Thinking about it now, this was most likely the first taste of personal development that became a hunger, and at times an obsession. I needed that to get to the next level in my profession after that job, and this mantra helped me make better choices. I remind myself of it each time I want to get to the next level, which usually comes with increased visibility…and vulnerability.

I’ve been striving ever since that realization to master being my best self by my OWN standards, and to enjoy freedom in accepting myself, while reconciling how to be the cause of transformation at the scale that I feel is necessary to really make the impact on corporate careering, hiring and engagement that I am driven to make.

So, while it can be fun and freeing to throw caution to the wind when it comes to social media, the consequences of doing that may not align with what you want for the long-term – your BIGGER why.

I’m not advising you to be anyone different for anyone’s sake. Lisa Sasevich, offer communication coach, shared a lesson her father, a famous ventriloquist, taught her, “Don’t change your act, change your audience.”

I finally got around to watching The Greatest Showman last night. If you haven’t seen it, I won’t spoil it for you. I will tell you that while it was inspiring, it was also a warning to not let your desire for acceptance compromise what really matters in life.

My hypnotherapy hero, Marisa Peer, has worked with royalty and rock stars, and shares just how common it is for highly successful people to suffer from not feeling like enough. In fact, it’s what drives them to achieve. Barnum was no different in the movie’s portrayal. The drive to build something extravagant was fed by his need to be accepted. So, sometimes the need for approval can be purposeful and can fuel some big dreams. However, it was also almost the demise of all he held dear.

When being intentional about your brand (you have one whether your conscious of it or not,) remember to honor who you are and what is most important to you in the grand scheme of your life.

Besides, what kind of happiness do you think you can obtain by becoming someone else? How long can that last?

You can be successful and authentic.

What I want people to get about their brand is that it doesn’t mean just mean putting something out into the world to increase your visibility or engagement. A brand AT ITS BEST is an intentional outreach designed to resonate with and attract people who enrich your network and life experience.

If your boss enriches your life, say with a paycheck, and you want to keep that paycheck, then put things out into the world that your boss would appreciate. This implies that you would take time to understand what he or she appreciates and allows before you create and put it out there. However, if you’d rather have a different boss who lets you do you, make sure what you put out in the world reaches that kind of boss, resonates with him or her or them, and inspires them to take action.

Be willing to let go of people, like your current boss, who just don’t get you. And, be willing to give up the paycheck, too. And if you’re not, make an empowered choice to play by your boss’s rules until you gain the freedom to do you.

“Are you picking up what I’m putting down?”

That’s my favorite, more modern version of the mantra, which was the most valuable part of my door-to-door sales experience.

The freedom in this mantra comes from unapologetically and without attachment to the outcome declaring, “This is what I’m doing whether you’re with me or not. If you’re not, I’ll find somebody else who will. If you are, let’s get to work.”

If people aren’t picking up what you’re putting down, consider changing the audience, not the act.

They may not resonate with you at the moment. They may have their own set of blinders, or other priorities. It’s not personal. Move on.

P!nk’s official music video for ‘So What’. Click to listen to P!nk on Spotify: http://smarturl.it/PSpot?IQid=PSW As featured on Greatest Hits…So Far!!!.

Karen Huller, author of Laser-sharp Career Focus: Pinpoint your Purpose and Passion in 30 Days (bit.ly/GetFocusIn30), is founder of Epic Careering, a career management firm specializing in the income-optimizing power of social media and personal branding, as well as JoMo Rising, LLC, a workflow gamification company that turns work into productive play. While the bulk of her 20 years of professional experience has been within the recruiting and employment industry, her publications, presentations, and coaching also draw from experience in personal development, performance, broadcasting, marketing, and sales.

Karen was one of the first LinkedIn trainers and is known widely for her ability to identify new trends in hiring and personal marketing. She is a Certified Professional Résumé Writer and Certified Career Transition Consultant and Certified Clinical Hypnotherapist with a Bachelor of Art in Communication Studies and Theater from Ursinus College and a minor in Creative Writing. Her blog was recognized as a top 100 career blog worldwide by Feedspot.

She was an Adjunct Professor of Career Management and Professional Development at Drexel University’s LeBow College of Business and recently instructed for the Young Entrepreneurs Academy at Cabrini College, where her students won the national competition and were named America’s Top Young Entrepreneurs.