7 Signs Your Company Is A Sinking Ship 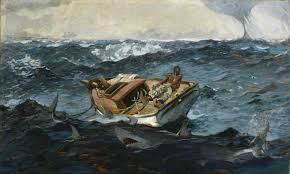 When I speak with leaders who are ready to jump ship, I can’t help but think about those who will be left behind.

Morally, these leaders would love to warn everyone, to tell them to see the writing on the wall. Ethically, that would hinder, if not destroy, any efforts a company may make to stay afloat, even if sinking is inevitable.

The writing on the wall isn’t always obvious, and unless you’re looking for it, you could completely miss it. You may prefer to stay ignorant and oblivious, because it is bliss after all. However, if the writing is on the wall, it would behoove you, for the sake of all who depend on you, to prepare yourself to jump ship.

Take a look at a map and identify potential next destinations, locate your life preserver and lifeboat, jettison extra weight, and stock up on supplies for a journey. If you’re getting the analogy, I’m advising you to start thinking about what an ideal next step would be (if you really want to go for paradise, get Laser-sharp Career Focus: Pinpoint Your Purpose and Passion in 30 Days), update your résumé and LinkedIn profile (or, if it’s not your area of strength, delegate it to an expert), start selling extra things around your house, and have at least 8-10 months of savings (though we can help you land much faster if you let us guide you in strategic planning and execution of your campaign).

If the boat is arockin’, here are some signs that you may want to risk a solo journey or else risk going down with the ship and everyone else on it.

It seems obvious, right? Leaders have the inside scoop and if they are leaving, they know something you don’t. However, even workforce reductions that shed tenured folks or layers of middle management can leave a company vulnerable.

It’s been my experience, as someone who was blessed to go overboard of a sinking ship well before the voyage got scary, when our company let go of many of its tenured folks, it lost keystone pieces of its identity. If a company cannot reinvent itself to be stronger than before, it remains unstable. Layoffs at my old company were hard-hitting, even though it was an opportunity for me. I rode that opportunity as far as it would take me, but saw it was losing steam. With the help of a coach (hired by my company,) I devised and executed a 6-month plan to start this business. That was 12 years ago. Even though I was out in the middle of the ocean in a dingy, I felt safer there, and watched sadly as the ship sank. Everyone made it to shore and we keep in touch in a Facebook Group called “Remembering Devon Consulting.” True story!

Similarly, if someone in a critical role leaves, whether by choice or by force, and this person is not replaced, conditions will surely only get worse.

When seas are rough, it may be easy to blame the weather. I can recall a couple of news stories in recent years of cruise ships that wound up heading into rough seas. Was the weather blamed? No – the cruise lines, their executives (for unsafe or unclear policies), and the captains were blamed. Unless these parties take accountability for bad decisions made with information that was available, these mistakes will be repeated. So, if your company is undergoing slow sales or worse, like a PR crisis, and no one is taking accountability, or the even if the only one willing to take accountability is merely dismissed and the company changes nothing, get ready for rough seas ahead.

Let’s say you know that an investment is necessary to deliver to customers with the quality and speed that they expect, but the focus of leadership has been cost-cutting, so investments will have to “wait.” Another scenario is that you know that you are short-staffed and overextended as it is, but no new people will be added, whether contract or permanent. No matter how good it was in the past, you need to get a contingency plan in place. It will take everything that you have, since you most likely come home exhausted and completely spent.

Trust me when I tell you that it if you just take 6 hours over a 2-3 week period on the front end to let us help you sharpen your tools (90-minutes for a branding consultation, 90 minutes to gather and compile all the substantiating evidence of your value using our formula, 30 minutes to scrutinize your résumé draft, 60 minutes to share your feedback with me, 30 minutes to scrutinize your LinkedIn profile content, 60 minutes to share your feedback), we can then show you how to spend any amount of time you can spare, even if it’s just 1-2 hours, to build momentum each week and generate 4-5 highly desirable opportunities in 6 weeks.

The alternative is experiencing the trauma of being on the sinking boat and then floating adrift without certainty that you’ll be saved.

Do I need to say more about this? I think I do, because I have spoken with far too many people who have tolerated this. I’m not talking about a couple of days. I’m talking about people who go weeks without getting paid, and then are offered no remuneration for essentially lending the company cash flow. Icky, all around.

I recall during the recessions of post 9-11 and the housing crisis many companies having to cut bonuses, pay raises or even moving people backward in salary in order to keep them employed. In a bad economy, where perhaps the weather can be blamed because navigating to quieter, calmer seas just isn’t an option, I can see how this is acceptable. In dying industries, this may become the norm. Sometimes the ship is an industry. Sometimes the weather is literally to blame, such as a natural disaster. These are some conditions where it may just be necessary and acceptable to keep people where they are instead of allowing them to grow. If none of these conditions apply, you are on a sinking ship with a wayward captain.

This is a norm in many companies. If it weren’t, we wouldn’t even call it an open-door policy. We’d just call it normal. Transparent leadership is really now only gaining traction as an attractive cultural quality, so it will take companies much longer to catch on. Closed doors breeds distrust, which has far-reaching trickle-down impacts. If it’s new, however, it may or may not be dangerous, but it certainly means changing tides.

If you trust your leadership, you may be inclined to ride it out. If you trust your leadership, go ahead and ask them what’s up. Let them know that it’s noticed and, if they are in tune, they will find a way to communicate something sooner rather than later. So often there are restrictions on what can be communicated and leadership will make themselves scarce instead of reassuring. Again, it doesn’t always mean the ship is sinking. Sometimes it means an acquisition is pending. Sometimes it means a hostile takeover. Either way, brace yourself for rough seas. It could mean a great opportunity to be an employee of a larger, more nameworthy employer. If this could be a good change, at a minimum, your boss should be able to tell you this. If he or she can’t, it may be time to jump ship.

I have worked with both with the boss, who felt a moral obligation to give people a compassionate heads up, and I have worked with the employee who would rather stay with such a great boss, but has to heed this warning because they trust it. Either way, get on it. There’s a high probability your boss was holding out a while with hope that things may turn for the better and waited until the last minute when things are dire to give you this warning.

If this headline jumped out at you, you most likely are seeing some of the writing on the wall. Whether you notice any or all 7 of these things, isn’t it wise to prepare yourself?

We help corporate professionals identify, pursue, and land ideally fulfilling and well-paying opportunities so that they can feel alive, look forward to going to work (YES – it’s REALLY possible) and secure a lifestyle that they love.

If you are on a sinking ship, let us help you land the closest thing to paradise that’s possible so you can turn what could have been a tragedy into a triumph.

Karen was one of the first LinkedIn trainers and is known widely for her ability to identify and develop new trends in hiring and careering. She is a Certified Professional Résumé Writer and Certified Career Transition Consultant and Certified Clinical Hypnotherapist with a Bachelor of Art in Communication Studies and Theater from Ursinus College and a minor in Creative Writing. Her blog was recognized as a top 100 career blog worldwide by Feedspot.

She was an Adjunct Professor of Career Management and Professional Development at Drexel University’s LeBow College of Business and recently instructed for the Young Entrepreneurs Academy at Cabrini College, where her students won the national competition and were named America’s Top Young Entrepreneurs.

Social tagging: company's days are numbered > dying company > Is my company dying > should I quit > time to leave my company