Risking a life to save a life 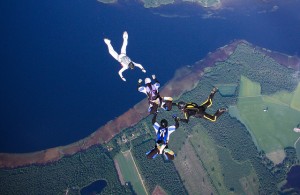 Do you have a cause so important to you that you would be willing to risk your life? How big of a game are you willing to play?

I spent an amazing few days in New York City this week with people who are playing a big game. These people want to amass wealth for themselves and for their families. But they are deeply invested in the success of their clients and they want to make huge contributions to this world. It was incredibly inspiring.

At the Rainmaker Summit, I met a guy name Mark Dana and his daughter Emily. Emily is entering her first year in college and has already been an entrepreneur for many years. She makes jewelry and has great demand or her art. At Rainmaker, she learned how to scale her business and become a millionaire, just like her dad.

It’s no wonder why she is such an incredible kid. August 9th Mark is risking his life to save other kids’ lives. Mark is going skydiving to raise money for Gift of Life, an organization that makes life-saving operations possible for children suffering from congenital heart disease. The 3rd annual Jump For Life event is being held in conjunction with the Locust Valley Rotary Club and Skydive Long Island.

He has never done this before.

Not only do I find it inspiring what he’s doing for kids, I also think it’s worth considering what some people are willing to do and how far they’re willing to go. In a world where people settle for less far too often, it is really great to know that there is a strong community of people who are willing to take on huge challenges for the sake of others.

You can help Mark Dana reach his personal $5K goal, which saves one child, by sponsoring him. Contact Gabor Karsai at 516-359-8028 or karsai@aol.com.

I wish Mark luck in his fundraising efforts and a safe landing, but more importantly the thrill of a lifetime in his freefall from an airplane at 10-30 thousand feet. I also wish the best of success for him, Emily, and all of the Rainmakers past and present playing a gig big game so that the world can be a better place.

Posted on July 17, 2014 by Karen Huller in Campaigns, Employment Situation | Leave a comment

“How do you deal with people who blame everything else for their unemployment?” I was asked today by someone referring to the government as the main culprit people point to. I told her I don’t waste my time and energy getting goaded into arguments about politics. Many people look to the government to make conditions more conducive to finding gainful employment. These folks, most likely, will not be my clients – at least not now. Maybe when they are sick and tired of being sick and tired they’ll reach out for my help.

My clients tend to want to be in control of their careers. Being in control requires taking accountability. When someone is ready to learn a new, more effective system and do what they hadn’t been doing before, they get better results. She knew, however, that my mission is to help as many people as possible, and the group of people that she sees needing guidance, tools, and strategy such as I provide, are great in number and will not recognize the help that I’m offering as a solution to their problems.

While I do have big plans to revolutionize the way people approach their career, and how companies approach hiring, right now it is in my power to change career trajectories one person at a time (or more like 5 to 10 at a time.)

The podcast I started producing, Tales From The Flipside, chronicles real life transitions success stories in hopes that people will recognize a part of their story and the challenges and hardships that some of these clients have faced, but more so, that they will see a future self in the happy ending.

This podcast is one of my most favorite things I’ve ever done, and I hope to do thousand more. It’s really not just about their story; it’s about their empowerment.

Now that they have filled a gap in their knowledge and skills around careering, they have every reason to believe that, no matter what happens, they will be able to land happily on their feet in a better position.

Try that feeling on for yourself. Is that something that you want?

I welcome you to subscribe for free and gain access to all of our episodes of Tales From The Flipside.

If while listening you start to imagine what your transition success story will sound like, allow us to provide to you with a free resume and campaign evaluation. Let us provide you with value and advice that will accelerate and optimize your career transition. Enable us to get to know you a little, and establish our expertise. We are confident that we can help you if you let us.

E-mail your résumé to info@epiccareering.com and we’ll send you our needs assessment form.

Get ready! Economy’s going up!

Posted on July 7, 2014 by Karen Huller in Employment Situation | 2 Comments 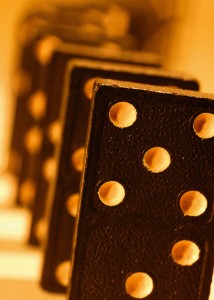 Last time I posted this data, it was to shed some light on the improvements, because the media often chooses to sensationalize negative economic indicators, or simply put their focus there, and minimize positive indicators, claiming that there’s something else at work.

Some people believe that these numbers are completely manufactured and give them no credence. Economists responded that the GDP, stock conditions, etc. indicate a less than favorable economic recovery and doomsdayers are still waiting for that fiscal cliff.

For those, however, that believe, like I do, that hope is a better condition for positive change and momentum, these numbers will be quite the inspiration.

Yes, the summer is a time to enjoy – AND get ready! September is the second biggest hiring month of the year. Have the infrastructure of your transition in place by Labor Day and take full advantage of the boost in hiring!

News summary, from the Bureau of Labor and Statistics (7/14)

The national unemployment rate lowered by .2% over the month to 6.1% with 9.5 million unemployed. The number of persons experiencing long spells of unemployment (over a year) lowered by 284,000 people to 2.1 million. 3.1 million individuals had been unemployed for 6 months or more in June, a decrease of 293,000 over the month, and a decrease of 1.2M over the past 12 months. That means about 29% of those who became unemployed 6 months ago are still unemployed today. They are, however, competing with 900,000 fewer job seekers than they were in December when the unemployment rate was 6.7% and 10.4 million were unemployed. Long-term unemployment has been steadily declining since 2011 when 6.4M were experiencing spells of over 6 months.

The average number of weeks that job seekers are staying unemployed has decreased over the month to 33.5, which is 2 weeks shorter than 3 months ago, while the median also decreased to 13.1 weeks, a huge decrease of almost 3 weeks in 2 months!

Such a difference between the mean and the average may reflect that for most industries and geographies, job seekers may be able to transition within 4 months. However, a greater majority are either not be able to effectively execute a transition campaign, or may be in adversely impacted geographies or shrinking markets, creating challenges to transitioning that lead to extremely long spells of unemployment.

7M of these individuals not in the labor force do currently want a job and have reported searching during the past 4 weeks. We’re about where we were in 1994. It had steadily decreased until 2000, and has been increasing since then. May and June have been traditionally the highest months. Since 2011, this number had been above 7.1M during June. This is the first year that June’s numbers have been below 7M.

Another 2M are “marginally attached,” meaning they want a job and have searched for work during the prior 12 months, and were available to take a job during the reference week, but had not looked for work in the past 4 weeks.

1.4M did not actively look for work in the prior 4 weeks for such reasons as school or family responsibilities, ill health, and transportation problems, as well as a number for whom reason for nonparticipation was not determined (not counted as unemployed for the purpose of this report).

676K are discouraged workers who did not actively look for work in the prior 4 weeks for reasons such as thinks no work available, could not find work, lacks schooling or training, employer thinks too young or old, and other types of discrimination. This number has not been this low since March 2009. It hit a high of 1.3M in December of 2010.

A special note about the world economy:

Job creation worldwide has not been significant enough to impact the worldwide unemployment numbers, which have stood at 200M unemployed for several years.  Many other developed countries are not enjoying the recovery that we are:

Under-developed and developing countries are making much larger strides in their domestic economic development, and the focus appears to be on continuing to promote growth and economic opportunity in these countries.

Call us 610-888-6939 or e-mail us at karen@epiccareering.com and find out how we can get you ready to ride the impending hiring wave to higher professional ground.